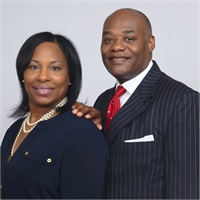 "If one chooses to condition themselves to stay out of their comfort zone, through personal development, then on can truly live life with full abundance."

Gary was a Big Brother to underprivileged students and a Harlem Little League’s Coach for many years. Rhonda exceled in Track and Field in her teenaged years, and is an extremely generous person. They both enjoy exercising and enjoying a full day at the spa and being pampered from head to toe.

Gary & Rhonda Dennis are both native New Yorkers. Gary grew up in Harlem, was married at a very early age of 23 and has two sons. Gary was always inspired to become a businessman and upon graduating high school, he immediately entered the job market and started working for The Bank of New York. At that time, seeing the importance in obtaining a college degree due to his aspirations of climbing the corporate ladder he obtained his BBA Degree in Accounting from Baruch College. Gary proceeded to excel in his career only to discover many years later that he was asked to be relieved of his services 5 days short of 25 years. Fortunately, Gary was able to establish his own accounting firm where he focused on taxation and business start-ups. His accounting firm was a segue for him obtaining another banking position with J.P. Morgan Chase. Although Gary quickly climbed the corporate ladder at J.P. Morgan Chase as a Vice President and became a fully Licensed Financial Advisor, he was still in search of a platform that would allow him to continue to practice both his Financial Services and Accounting Services with full autonomy and with a service structure that gave him open architect to use many top companies in the industry. Through a longtime friend Gary was introduced to the World Financial Group platform where he discovered the ability to service his clients in the way he saw fit while allowing him business ownership.

Rhonda was born in Brooklyn and raised on Staten Island, married at an early age and had one daughter. Rhonda worked for several banks throughout her career in banking, mainly in the investment banking sector for Citigroup, Societe Generale, and J.P. Morgan Chase. When Gary started with World Financial Group she was initially reluctant because she didn’t fully understand the platform and the capacity for both Gary and herself to build a business in the financial industry. Rhonda quickly changed her viewpoint about WFG once she took an up close and personal view for herself. She then saw the value of what WFG had to offer for her families’ future and the future of others. She quickly became fully supportive of Gary’s career path with WFG; and has her own aspirations of becoming full time in the business in partnership with her husband.

Gary got started with WFG because of the financial services business platform that gave him the ability of building a business of his own without referring any wealth away as he had been doing earlier in his financial career. In addition, it alleviated the ongoing risk of job security and being able to control his destiny with a life style of his choosing while at the same time being given the ability to do the same for others.

Gary enjoys the freedom. The ability to make a difference in other people lives, the personal development, the recognition and the awards, the inspiring events, and last but not least the money.

Gary’s greatest accomplishment has been becoming a better individual via personal development. Because of this he graduated from an intense business boot camp called Elite Circle, 5 times in a row as well as achieved his Senior Marketing Director promotion.