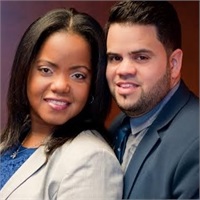 “Every adversity, every failure, every heartache carries with it the seed of an equal or greater benefit.” - Napoleon Hill

David is a singer, song writer and music producer while Tania loves reading and singing karaoke.

Tania was born in Dominican Republic and came to the United States when she was 12 years old. The youngest of 5 siblings; she was taught by her father at an early age to nurture her mind with positive thoughts to attract them. This life lesson prompted her decision to attend school for Travel, Tourism and Hospitality Management in NYC and work for companies such as American Express and AAA as a travel consultant.  As the travel industry evolved and points of contact with the clients changed, Tania quickly realized that she needed to change career paths.  This transition lead her to work in Higher Education and she was hired to direct the accounts receivables department in a private college; this was where she developed a passion for the financial service industry. However, Tania soon realized that in that environment she was building another man’s dreams and she wasn’t receiving what she deserved to make a better way of living for her family. At this time she was introduced to World Financial Group where she had the opportunity to pursue a business on her own terms. As Tania says: “When I was introduced to a business that would prepare my family for the future, recognize all of my milestones, nurture me while educating me and above all things push me towards becoming an entrepreneur, I knew that the time of action was now.  I decided to give my all to World Financial Group and in return the company has given me the opportunity and the tools to become a successful business owner, own my time and build a legacy for my kids.”

David was born in Queens, NY, was raised in the Dominican Republic and then returned to NY. Coming back to New York City there were many challenges David endured, but through all of the adversities he was filled with a greater purpose in which at the time he had not even recognized. The value of ownership and the ability to control ones’ time is recognized for many later on in life, but fortunately David had the example of his parents to see it first hand and therefore he knew this is what he wanted for his future. Starting out as a bartender to make ends meet and meeting many people along the way David realized that having ownership of time also meant being able to make a difference not only in his life but in the life of others as well. This epiphany became his passion! When David was introduced to WFG he saw that he would have the freedom to educate, mold and protect peoples’ lives while at the same time having control of his own time! As the saying goes, “If you love your job, you will never work a day in your life.” World Financial Group has given David the power to believe in himself again.  David says: “If anyone were to ask me what was my key ingredient to success I would tell them this, “Every time you are tempted to react in the same old way, ask if you want to be a prisoner of the past or a pioneer of the future.” - Deepak Chopra. When you make a choice, you change the future!”

Working in the education field Tania realized that she was not part of the solution, but rather part of the problem.  Seeing students graduate with student loans and excessive debt was a wakeup call for her. As a mother to six children, Tania did not want her children to be in the same situation. She wanted to leave a legacy for her family and make a difference in the lives of others.

What Tania & David enjoy the most about WFG is how it has the power to transform an ordinary person into an extraordinary leader. They have always believed that leadership cannot really be taught, it can only be caught. WFG, has allowed them to have met many key leaders which have taken the time to fuel their motivation and drive.  They were able to see how all of these great leaders have had one characteristic in common: it is the willingness to confront unequivocally the major anxiety of their people in their time. This, they believe, is the essence of leadership.

We’ve Tania & David have built teams in Central Florida & New York City, and received many recognitions and awards in business. However, they feel that their biggest accomplishment has been their personal growth.