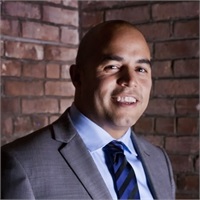 "What you focus on grows."

Victor can cook; and not just mac and cheese!

Growing up poor in the projects was considered normal for most people in Victor’s community. However, as a young visionary Victor always wanted and expected more out of life, but had no clue how to go about it. He never had access to the much needed lessons that come from mentorship. With his father being an alcoholic, and missing almost every big event in his life, the only mentorship he received was from his Uncle. “Go to school and get a good job with benefits”, or “beneficios” his Uncle would always say. So, as most inner city kids left without guidance, he too was left to figure out life on his own.

After barely graduating high school and never really considering college Victor worked menial jobs at Central Park Summer Stage, Eddie Bauer and as a mailroom clerk. Understanding that going back to school was instrumental for a better future Victor graduated with honors and a legal studies degree from John Jay college in NYC. Working for the NYC Department of Corrections as a legal coordinator, for over a decade, Victor knew he was way better off than many of those that he grew up with. But his passion and heart were somewhere else. He wanted to build a future, and work in an industry that he believed in. He wasn’t going to be one of the many people that missed their true calling, and are not aligned with life's mission and purpose. Victor did not want to be remembered as a city employee and be like so many people who are lost and frustrated, who just give up on life and accept things the way they are. His belief that our Creator did not destine us to think small or give up on our hopes and dreams made him continue searching for something where he could make a difference; impact lives and make history!

Victor is currently a business owner with WFG and enjoys his family time with his wife and 2 beautiful children.

First, as a part-time insurance agent, and now as a full time entrepreneur Victor planted his flag at World Financial Group because he has access to a platform that will empower families to leave legacies for generations to come. This is was what made him realize that this was his true calling. Being able to coach and empower middle income families through leadership development and financial coaching Victor can now help people increase the understanding of how money works, and grow through constant personal development. Most families don't know what they could do better, and if they knew better they would do better; he can now show them how.

Victor enjoys the leadership, the people he gets to work with and the fact that he has an open platform to service his clients. What is most appealing to him is the freedom to control his time and direct his life in the way he chooses.

Victor has learned to become a better leader and builder of people and considers this a great accomplishment because in the past he has been able to be successful only on his own. Now he can duplicate the leader he has become.

WHAT ARE SOME OF THE THINGS YOU ARE LOOKING FORWARD TO IN THE FUTURE?

I look forward to building a champion factory by showing people how to push past their fears and rise to top. I plan to promote three associates to their Senior Marketing Director position, that each cash flow over a six figure income. Our team will open up a new office in the middle of Long Island that will be a hub for growing leaders and changing family’s lives for the better!